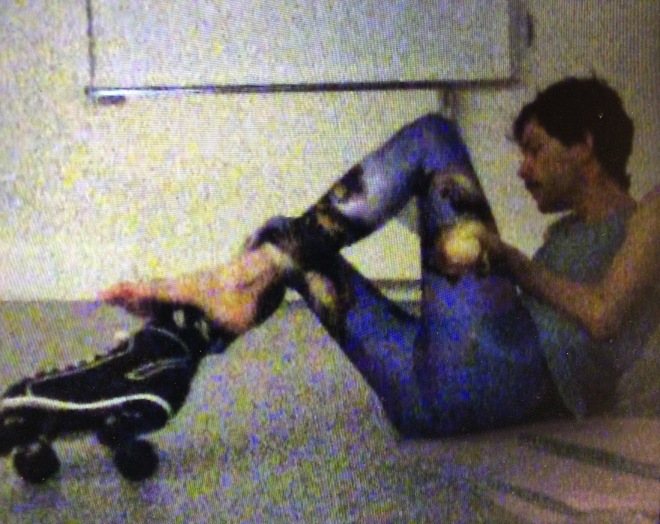 This weekend (21-22 May) I’m showing the Fred Herko piece commissioned by Siobhan Davies Dance for What Remains… Anatomy of an Artist: a festival of 10 new works that I’ve been working on for the past nine months or so. It includes the following essay and bibliography:

Possibilities for a Pleasant Outing

There’s a bit in the collage of texts spoken in Possibilities for a Pleasant Outing in which Donald McDonagh lists all the roles — the “job descriptions” if you like — that might be attributed to Fred Herko: “…scene designer, underground movie star, ad hoc couturier, textile designer, interior decorator, babysitter, corporation officer…”. It was an attempt, I think, at preserving for posterity the fullness of an artist’s life not quite contained by the labels “dancer” and “choreographer” (as well as to let some light in on one shadowed by the staggering monumentality of its termination).

There is scant biography within the piece — after all a life-story is like a string, bluntly cut at each end, and here we are talking traces: tangled, unravelling messes; full of promise for the forensicist — so a little background… Fred Herko (1936–64) grew up in Ossining, New York. While studying piano at the Juilliard School of Music, he discovered dance and in 1956 won a scholarship to study at American Ballet Theatre School, taking extracurricular classes with Merce Cunningham and James Waring. He was a founding member of both the New York Poets Theatre — with Diane di Prima, LeRoi Jones, James Waring and Alan Marlowe — and the Judson Dance Theatre, where he contributed two original pieces to the inaugural concert alongside Yvonne Rainer and Deborah Hay.

Herko is all over early 1960s New York. At the Factory he could be found among the “mole people” — the subterranean speedfreak superstars burrowing down at the back — and starred in a handful of early Warhol films. So although he left virtually no written records, echoes of him resound widely, so much so that amid nine months of research I came to realise that the piece might exist without significant reference to the part of Herko’s life for which he has become most famous: his death, the moment from which his story is often told. Unsurprisingly so — it is dramatic: in 1964, following a rapid decline in physical and mental health, Herko danced out of a fifth-storey window. Whether this was the staged suicide performance he’d often spoken of, or the unwitting final act of someone who believed he could fly, no one can be certain. Addressing the way in which traces form strata of significance in varying widths prompted me to place my focus elsewhere, on a by-all-accounts more “positive” event: the making of Roller Skate, a now lost Warhol film from 1963.

Working outward from an absence — that of the original artefact — through descriptions of the film, poems, essays, articles, other films, accounts from those who knew Herko intimately and those whose lives brushed his only fleetingly, the process of confronting a queer archive became an integral part of the work. In lieu of an official record, ingrained perceptions, fuzzy memories and fealties come into play, all telling tales that slip around each other, never quite settling; gossip, rumour and speculation take on new value here and omissions reveal greater truths about the shape of queer history more broadly.

For Possibilities for a Pleasant Outing, I collaged fragments pulled from the pile of amassed material to create a text oscillating, I think, between lecture and poem. To make this physical I wanted to attempt something Herko excelled in: roller skating on a single skate. As a non-performer — challenged by tasks requiring dexterity and balance — the possibility of foundering seemed high, but I was interested in an idea that this failure might somehow provide a strategy with which to engage with Freddie, whose transgressions, unprofessionalism and self-destruction might commonly be perceived as failures, creating a sort of transtemporal dialogue. In turn, the texture of the language, the play with gravity and a tuning into phenomenological readings of a space thickly charged with its own traces of professionalism, skill and ability, has opened up my body to another language, one which has required trust, if not understanding.

The spoken part of Possibilities for a Pleasant Outing consists entirely of text gleaned from a wide array of sources, cut-up, stitched together and occasionally slightly modified.

Gerard Malanga, ‘To Come and Leave Nothing Behind’, poem quoted in full in Donald McDonagh, ‘The Incandescent Innocent’, Film Culture, volume 45, 1967

A selection of other texts — not sourced from directly — that have informed the work: